This archive web site is not in any way affiliated with The Agrarian Foundation. I have compiled and republished the articles here (they originally appeared on the Foundation's web site) as a personal project—with the permission of David Rockett. I found Mr. Rockett's writings helpful to me years ago as I was trying to better understand the Christian-agrarian worldview, and I believe they can be helpful to other Christians as they desire to live a life more in accord with biblical teachings.

I would like to someday republish a selection of articles here that were originally published in The Agrarian Steward newsletter. But, for now, I  am thankful to Mr. Rockett for allowing the articles that are here.

I invite anyone with an interest in Christian-agrarianism to also take a look at my blog, The Deliberate Agrarian. 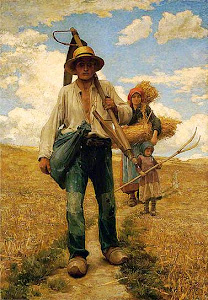